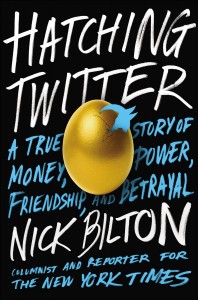 Nick Bilton’s Hatching twitter is an amazing story of how a company that was a technology mess, patched together a product by bits of code, built on a framework to prototype an idea by a bunch of engineers who were about to were about to be laid off from a failed startup, got almost sold twice and saw three CEOs in less that two years went on to become one of the biggest social media networks that ultimately got a market valuation of $10 billion and in the process also played a major role in revolutions across the world.

I have ‘followed’ twitter closely from 2007 and know a little bit the history of the company, I still found a fair bit of surprising information in this book. It is definitely, one of the best books that I have enjoyed reading in 2013. For most of us Jock Dorsey has been the public face ‘ inventor ‘ of twitter. This book will change your perception to an extent.

There is no doubt that the author has painstakingly conducted hundreds of hours of interviews with both current and past employees at Twitter, as well as their friends and perhaps even competitors at other companies. All four co-founders of the company agreed to be interviewed – and so did board members (past and present). Yes there were a few who were not interviewed or refused to be interviewed and the chronology of events might be slightly less than perfect, but that’s OK. All the main characters, EV, Jack, Noah, Biz and Goldman are portrayed brilliantly. This is a must read if you have ever worked on a startup, have had your own startup or even dreamt of anything related to a startup. From agile prototyping to how ideas are sparked, nurtured and molded, the book has an anecdotal description of all that. The book also captures the heart, soul and pulse of the silicon valley perfectly.

The author starts off with a narrative description on the co-founders and a few others who where key in shaping or rather hatching the the twitter idea and slowly builds up to capture the ideological tussles between them. Things do get mildly technical as you read through the book, but at most places the author ensures to provide a brief explanation. But at the end of it, it is after all a book about a technology startup. As long as your realize that before you pick it up, you won’t be disappointed. Funding is key for any startup and the author subtly and sometimes cautiously shows the complex changes that an investor can bring in. Not something new, but an interesting section nonetheless.

While twitter is hatching, it finds itself in a unique position where it has to navigate its way and avoid various acquisition attempts ranging from bigwig competitors like Facebook, celebrities and former vice presidents. From boardroom discussion to private meetings, from internal employee briefings to last minute public blog post changes, the author has captured it all spot on. All this is largely invisible to people outside twitter. One of the many things that I felt right about this book was that is the perfect size. Not too long and not too short, there is hardly a section, paragraph or page which you might be tempted to skim through or skip. This is a rare thing for me to find in a nonfiction book.

This book could have easily been a boring narration of company and its journey, but hats off to Nick for writing and presenting this so well.

Of-course timing the book release just before twitter went for its IPO was a smart move.You can’t really beat that. If twitter touches your life or work, you should give this book a read.